Early retirement due to musculoskeletal pain

Three months ago, Juha did something he did not think was ever going to be possible. He returned to work. Going back two years, and Juha’s situation was a different story. After suffering from debilitating back pain caused by his scoliosis, he had to leave his police job and retire early. “I thought early retirement would be fine, but quite quickly it became tiring and boring, and laziness kicked in” says Juha.

Although Juha had accepted his fate of early retirement due to severe musculoskeletal pain, the days quickly began to feel too long. “It does the human spirit significant harm when you are not able to apply your skills or feel useful.”

Juha never imagined he would be able to walk without a cane, much less be able to return to work.

Juha never imagined that he would be able to walk without a walking cane, much less be able to return to work. In fact, it was so painful to walk that he was already thinking about having to start using a wheelchair soon. That is until he began musculoskeletal rehabilitation at the Nordic Health clinic. Juha exercises on the G110 Back Extension device alongside another Nordic Health clinic patron.

Juha and the physiotherapist at Nordic Health created an individualized exercise therapy program and Juha began by completing the program 2 to 3 times a week. For more on Juha’s first visit at Nordic Health, be sure to watch this exclusive video.

Three months at Nordic Health proved beneficial for Juha as shown in the testing outcomes. His isometric strength had increased by 399% and mobility improved by 90% when averaging the results in all spine directions. Not only was the exercise data pointing at improvement, Juha noticed the changes himself.

A year of consistent device-based exercise therapy and doing at-home exercises and stretching, Juha noticed a significant difference in his own attitude. “After only a year, I felt so good that I was already thinking about being ready to return to work”.

Movement is medicine, even for painful complaints

Juha believes it was certainly the right move to return to work. He is now able to work part-time as a police officer. However, regular exercise remains an important part of his daily life. Juha does 2 to 3 exercise sessions a day, using the at-home exercises provided by EVE as well as stretching exercises. Even during his workday, he can incorporate short weight-training and stretching sessions.

Juha continues to visit the Nordic Health clinic at least once a week. He believes the device-based exercise therapy to be the only individualized and effect solution that works for him.

“I spent several years running from doctor to specialist. Doctors only prescribed rest and prescription pain medication. One-on-one physiotherapy and manual therapy also seemed to be standardized yet there was no controlled movement.” Juha feels that he was never able to find individualized care. Hanna does mobility and strength testing for Juha with the DAVID G150 Lateral Flexion device.

After completing his successful musculoskeletal rehabilitation program, Juha and the clinic instructor customized his treatment to be more prevention focused. Here, the program goal is now focused on preventing musculoskeletal problems from returning by ensuring that Juha’s spine remains strong and mobile. For more on his current prevention program, we spoke with Hanna one of the clinic’s instructors.

At one of his visits to the clinic, Juha and Nordic Health instructor Hanna performed isometric strength and mobility tests using the David devices. After this Juha and Hanna sat down to look at the EVE report that was automatically generated on the platform. The mobility and isometric strength testing shown in the EVE report were done about 2 years apart. “At this point it comes down to prevention physiotherapy since Juha’s results are clearly in or near the reference values for his age, sex, and other factors”. Some key aspects to note from the EVE reports show that Juha’s back strength increased by 10% while his abdominal strength decreased by the same amount. Hanna also notes that there has been a good and steady increase in Juha’s spine mobility. “Handgrip strength has slightly decreased in 2 years. Of course, this is natural with age, but it is good to know this so that we can continue focusing exercise on this aspect to prevent further strength decrease.”

“The testing results prove that not only am I feeling better but I am actually doing a lot better”.

Hanna emails the results to Juha directly through the EVE platform. This is a useful feature since Juha can access the EVE reports on his own time as well. Juha is happy to have the EVE report because “it helps to see my testing results this way. It is also rewarding to see that my persistence pays off. The testing results prove that not only am I feeling better but I am actually doing a lot better”.

A patient’s recovery journey is an ongoing process

When asked about how he views his overall recovery journey from early retirement due to pain and now back on the police force, Juha remains adamant that “the biggest mistake I’ve made is not starting exercise therapy sooner”.

“The biggest mistake I’ve made is not starting exercise therapy sooner.”

As mentioned before, Juha spent many years visiting doctors and specialists who prescribed pain medication or random manual therapy. These treatments left him suffering from adverse side effects and no effective way of moving his pained muscles and joints.

Although Juha’s musculoskeletal pain has not completely vanished, he is thankful that his situation has improved so well that he can even return to work. With exercise therapy at Nordic Health, Juha found an effective and targeted treatment program. An exercise therapy protocol that can improve a scoliosis patient’s painful dilemma, has compelling potential in transforming musculoskeletal care.

Interested to learn more about Juha and his exercise therapy journey? Watch the video below to learn more! Subtitles are available in 8 languages.

From footballers to whiplash patients: WorkStrong Physiotherapy clinic treats them all 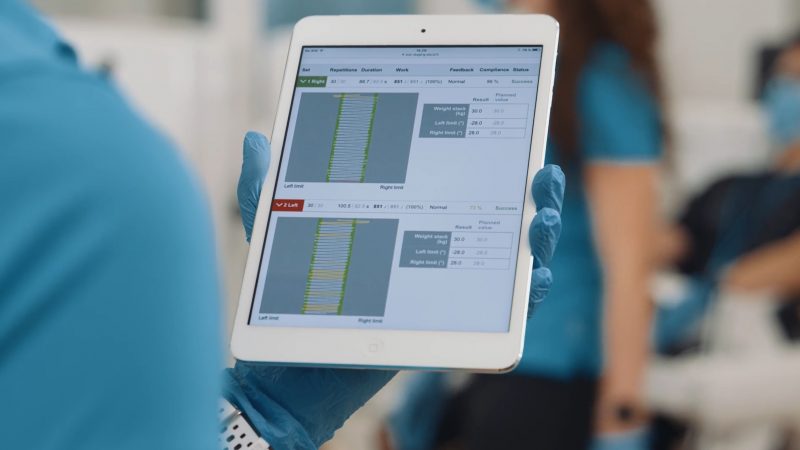 Exclusive insight into the business case for DAVID

This article discusses a few interesting points from the webinar’s Business Case discussion. For more information, be sure to...
value based healthcaremedical exercise therapybusiness case

I am Stefan Meyer, a sports scientist based in Leipzig, Germany. Sports medicine has been close to my heart...
physiotherapymedical exercise therapy
See all blogs