On a scale of passionate golfers, Michael Hill is almost off the charts. Despite chronic back pain, Michael refused to give up the game he loved, even if it meant being ‘ultra sore’ after a weekend on the course.

“Occasionally the back went into spasm. It would get to the point where it was ultra sore and I couldn’t rotate my body properly.” explain Michael

“So I would pull back a bit, but I kept playing because I just love my golf.” But the opportunity for a dream golf trip – a once-in-a-lifetime experience playing ‘all the Royals’ in the United Kingdom – forced a change of thinking about what his body was telling him.

“We started planning this golf trip to the UK and it meant playing 20 odd games in 25 days,” Michael explains.  “So I needed to do something, because usually after about three games in a row, I’m gone.” 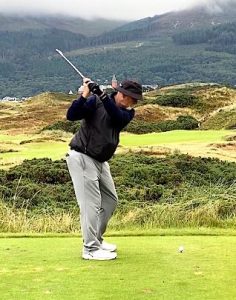 Michael’s back pain started when he was 18 years old and working in the print industry. “You’re constantly bending down picking up paper and it’s a dead weight,” Michael says.  “I obviously picked up something that I shouldn’t have at the wrong angle when I was an apprentice, and my back went. From then on I had constant back pain, so I went to an osteopath every month just for maintenance.”

Michael also consulted a rheumatologist who diagnosed a prolapsed disc and offered three treatment options. “The rheumatologist said, “You can fuse it together. Or you can try to cut a bit of the disc off. But he said fusing doesn’t last long and surgery is the last resort. He said the best thing is to start exercising, so that’s what I did.”

The rheumatologist said the best thing is to start exercising, so that’s what I did.

With strengthening his back and neck a priority, Michael decided to ‘give getback a go.’ “I had nothing to lose. I thought it could only be of benefit to try and get me through the trip.”

Michael’s Initial Assessment at getback proved to be something of a reality check.

“When (Head of Exercise Physiology) Adam brought up the graph with my strength results I thought, ‘I’m not as strong as I thought I was.’ “

“My second thought was, ‘If I’m going on this golf trip overseas I really need to strengthen my back.’ “

Armed with an individual program focused on strengthening the deep supporting spinal muscles in his back and neck, Michael spent 16 weeks exercising on rehabilitation devices designed to isolate these muscles. By the end of his final assessment, Michael’s results had improved drastically.

An individual program focused on strengthening the deep supporting spinal muscles in his back and neck.

“The overall strength of my back had gotten a lot better. My neck was also a lot stronger and the muscles were supporting the head properly.” says Michael.

And after not being able to rotate his body fully after a weekend of golf, his mobility had improved too.

But the big test was still to come – 20 rounds of golf in 25 days on some of the world’s most famous and challenging courses.

“We based ourselves in London for the first nine days and we played eight games there,” Michael says. “Then we went to St Andrews and we played three courses up there. We played all the six Royals. It was full on.  When we were in Turnberry, there are two golf courses so we ended up playing 36 holes in a day, just because we hadn’t played enough golf!”

And after all that, the obvious question is: was he still able to walk? “I’m never as sore as I used to be,” Michael says. “Now there’s no problems at all getting through a game. So I sort of survived it all and I didn’t disgrace myself!” 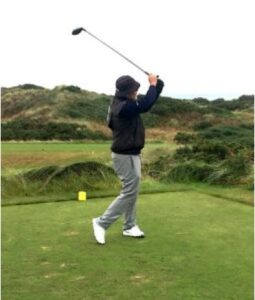