I’ve spent way too many hours to try to figure out why? I mean, after all, designing a resistance training device is not rocket science. It’s biomechanics. Simply, align the axis of the movement arm with the joint axis and design the correct exercise specific loading curve. Ok, maybe there’s a little bit more than that to consider, but at least that’s a start.

So, to design a device that won’t destroy one’s joints in the long run (and especially not in the short run) and provide a maximal stimulus for neuromuscular system requires some knowledge about anatomy and biomechanics. To design a device for musculoskeletal rehabilitation takes the precision of the design to a completely next level. Thus, an excellent rehabilitation device is always also a great exercise device (if the weight stack is sufficient) but a fitness device is very seldom applicable for rehabilitation.

Let’s go deeper into the anatomy of the good old leg extension device. It is a single joint exercise where the movement takes place only in a knee joint and is caused by a contraction of the quadriceps femoris muscle.

A skeletal muscle consists of muscle fibers which consist of myofibrils. Myofibrils, in their part, are composed of repeated sections of sarcomeres, which are the smallest functional parts of a skeletal muscle. Each sarcomere consists of thick and thin bundles of proteins referred to as myofilaments, actin and myosin. They slide past each other while a muscle contracts or relaxes. At the sarcomere level, the muscle is at its strongest when actin and myosin are completely overlapped, thus having maximum amount of crossbridges between myofilaments. In other words, the more actin-myosin-crossbridges, the more force is produced. In short, purely concentric pulling force of the muscle is the greatest at the midpoint of the movement. 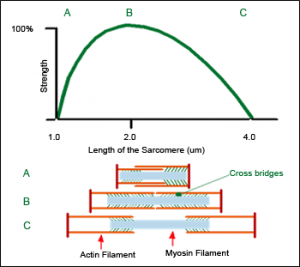 Figure 1. Representation of a strength-length relationship. The peak of the force production of a muscle occurs when the actin and myosin filaments are completely overlapping (B).

Now, if you think your everyday life and someone asks you to jump as high as possible, you actually intuitively drop down a little bit before jumping up. You do it because that way you can jump higher. So, when eccentric work is immediately followed by concentric work, the force produced during concentric phase is higher than just by doing the concentric phase without eccentric work preceding it. But, if the movement is stopped for 0,9 seconds or more, this stored energy will be lost. 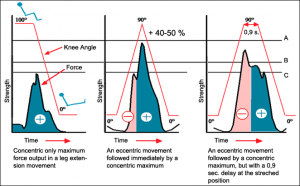 Figure 2. Representation of the effect of a stretch-shortening-cycle. A blue area depicts concentric and a red area eccentric force production. The diagram in the middle shows the increased concentric force production when it follows immediately after the eccentric phase. Häkkinen K; Komi P V; Kauhanen H., 1989. International journal of sports medicine 13986;7(3):144-51.

Muscle fatigue causes a reduction of strength with each passing repetition. This is a very well-known fact and can be felt by every exerciser.

A muscle does not fatigue in a proportional manner at all muscle lengths.

This phenomenon is better understood if we do one single, maximum repetition. Since the load is very high, the movement is very slow. What happens is that during this one repetition, the muscle fatigues. So, by the end of the movement the muscle is more fatigued than in the beginning, which is logical. Fatiguing also happens in the same manner with a set of repetitions. 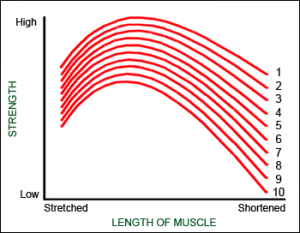 The answer is, it depends. If the goal for some reason is to load the muscles more in certain knee angles, the resistance curve should be optimized for that. Provided that the goal is to stress the muscles as much as possible throughout the movement range, all the above-mentioned matters need to be considered.

It’s easy to test if the resistance curve is correctly designed. Just pick any knee extension device. Choose a weight close to your one repetition maximum. Do one repetition. In most of the cases you will notice you reached a so called “sticking point” and you fail the repetition. It’s a point where the resistance curve exceeds your force production at that specific joint angle. To overcome that point you would need to accelerate the movement, kind of “throw” your legs to a full extension. That could possibly overload your knee joint in a critical area. Another option is to reduce the weight which is obviously a safer option. But unfortunately, you wouldn’t be able to stress your muscles optimally and use your full potential at the joint angle where you’re at your strongest. 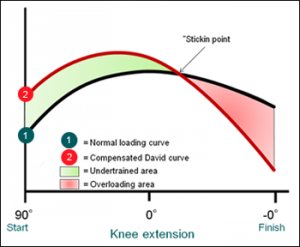 The resistance is changing even 60% during the movement.

Whenever you have a possibility to try a correctly designed leg extension device, you’ll feel the difference. When you do controlled repetitions you won’t actually notice that the resistance is changing even 60% during the movement. It just feels like the loading remains the same throughout the movement. That’s when your muscles are activated optimally in every joint angle.

To return to the heading, device based training doesn’t suck. It sucks only if the devices suck. Device based training done with correctly designed devices is an excellent way to stress your muscles maximally in a safe and controlled manner. In rehabilitation, the devices are priceless tools to isolate the muscle activation to certain areas of the body and to wake up and teach the neuromuscular system to function again. Only then the body is ready for more comprehensive exercises.

To conclude, there is a place for both device based and free weight training in optimally designed strength training and rehabilitation programs. However, the poor devices should be banned.

p.s. In the upcoming blogs I will concentrate on the correct axis placement and target muscle isolation. 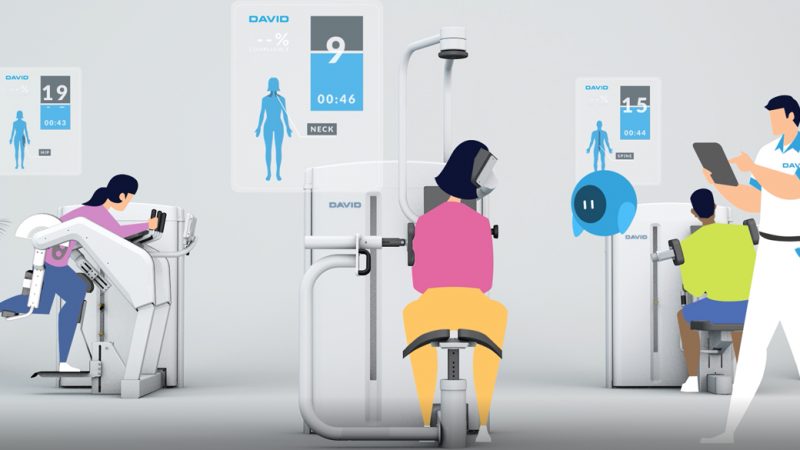 How will EVE support your rehabilitation journey?

EVE is an exercise assistant that helps every step of the way DAVID technology can be found in hundreds...
Exercise equipment physical therapy Rehabilitation 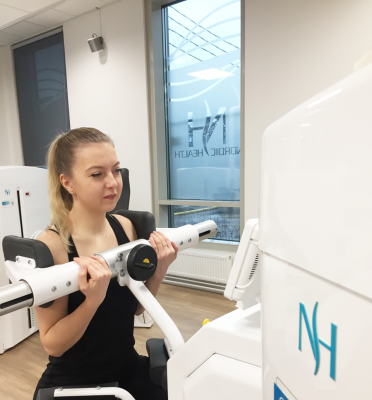 The DAVID technology achieved what regular gym equipment could not

I suffered from dull low back pain for many years, especially during the office work. After visiting a doctor,...
back pain treatment patient testimonial Rehabilitation 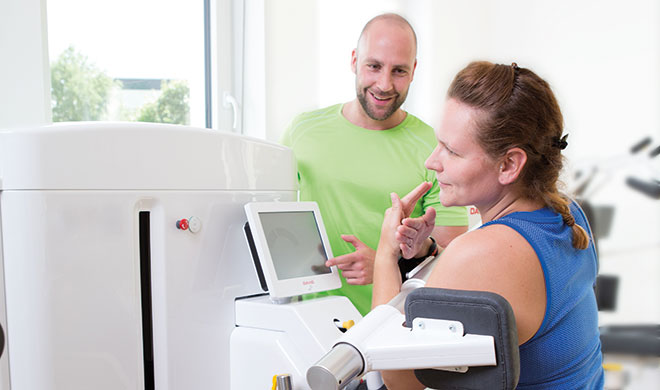 The FPZ Concept was developed in 1990 as a German-Finnish scientific collaboration to treat people with back pain. The...
back pain treatment medical exercise therapy patient testimonial
See all blogs